Thank you for landing on this page. This article explains how to use the visual App Generator provided by the AppSeed platform. The service can be used without an account and the links for the generated is sent via email.

The generated React Web Applications are generated using a two-tier architecture, where the React UI is decoupled from the backend.

How to use the Generator

The user has the freedom to combine the React UI with a Laravel, Flask or Express backend. All generated React web apps, share a common set of features:

The UI is crafted by Creative-Tim ( React Material Kit ) and based on the permissive license provided by this web agency, the generated React App will be provided under the same license (MIT).

At the moment this article is published for the first time, the App Generator provides the code on top of a singe UI kit, but in the future we plan to let users suggest a UI kit and get the usable code on email or saved in a repository system.

In order to use the generator, any user, event without an account can generate a usable React Web App equipped with JWT authentication, Sqlite database, ORM by with a few clicks:

After the action is confirmed, the platform bundles the app, run a minimum set of tests and require the email (if the user is not registered) to send the source code.

Step #1 - select the UI and the backend API 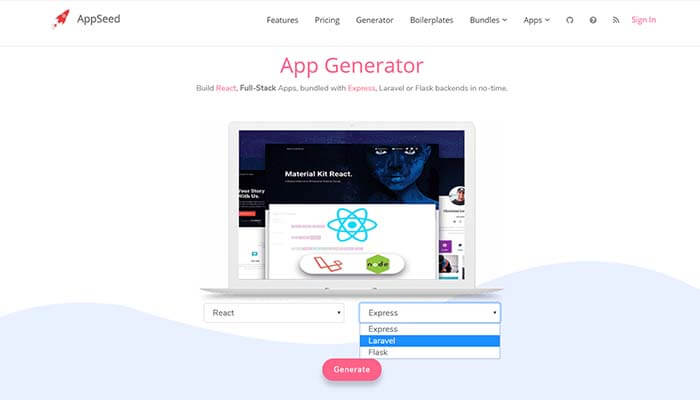 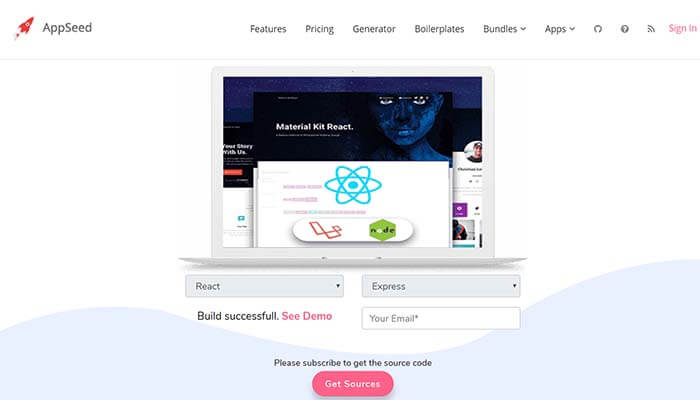 Step #3 - The user can visualize the LIVE Demo for the generated React Web App and get the code via email, in case is not registered. If the user is registered, the new build will be listed on his dashboard.

How the app generation process works

AppSeed is able to generate the apps in different patterns and technologies using two big steps:

The result: generated fully-coded apps, in different technologies and patterns.

Where to go from here

Learn how to use the AppSeed platform to generate Full-Stack Vuejs Apps in no-time.…

Find out how an HTML parsing tool can be used in production to cut the manual work involved in the UI processing and integration.…